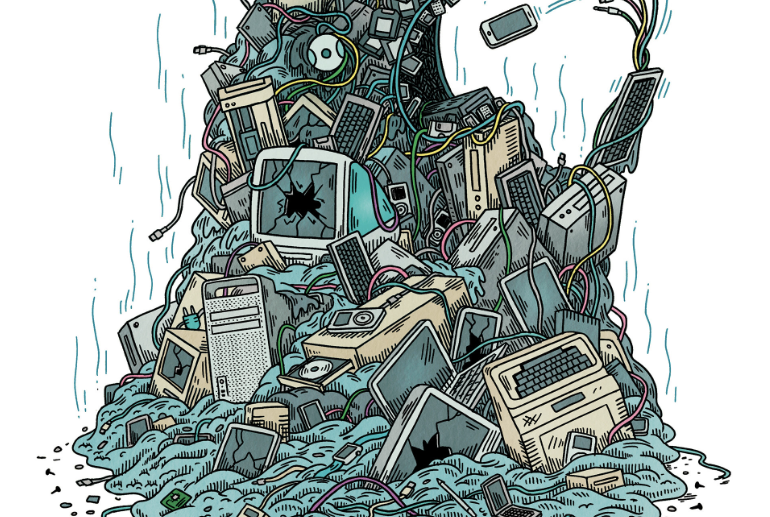 Many people still throw away electronics in the trash, even though this is a fact. E-Waste is a problem in landfills because it can have severe health effects on both animals and humans. So if you’re asking is e waste hazardous, in short, yes. Read on to learn why.

It’s not surprising that electronic products of all sizes and shapes have fallen out of favor. The average life expectancy for a computer or cellphone is now only 3-years. This has resulted in an excess of e-waste throughout the globe.

To prevent the danger of electronic waste affecting our ecosystems 25 US States have adopted regulations. These are known as “Electronic Laws” and help original equipment manufacturers, retailers, and the general public to address the continuing dangers of electronic waste.

The disposal of electronic waste is a growing problem, with consumers and businesses disposing of millions of electronics each year. This is particularly concerning when you consider that e-waste can be toxic to human health and other biological life, but it is not considered hazardous waste.

Is E Waste Hazardous? Yes. Why Does It Not Get Classified as Such?

The Environmental Protection Agency (EPA), published a policy in June 2002 that dealt with e-waste classification and disposal. It stated that obsolete electronics can often be reused, so they are not considered to be waste until it is decided that they cannot or won’t be reused.

Hazardous waste, on the other hand, is defined as “waste that has properties that could be dangerous for human health or the environment.” Hazardous waste could be either liquids or solids.

These facts about e waste and the way it is usually disposed of show that it is hazardous to people and a growing health risk worldwide.

This raises a crucial question about e-waste classification and how it is classified with the EPA.

Is it possible to reclassify electronics and electronic waste as hazardous waste?

Re-classifying electronics and e-waste in hazardous waste seems to have some benefits. The evidence is evident in the literature and reports on contaminated natural resources. Although there is no federal law requiring proper disposal of electronic waste, it is estimated that less than 20% is properly deconstructed, broken down and recycled in the United States.

Berkley.edu’s 2019 publication “How the United States Discards E-Waste”, noted that “the United Nations estimates that 10-45 percent of America’s e-waste exports to other countries, even though international laws prohibit it.”

Individuals and companies would be held responsible for properly disposing of e-waste if it was reclassified as hazardous waste. This would require proper recycling of electronics and prevent illegal export to other countries. This would be a major change that could significantly reduce the negative effects of electronic waste on the environment.

It is important to remember that the United States entered the Basel Convention in 1990 and the International Treaty in 1991. The main goal was to end all hazardous waste movement around the globe. The Basel Convention covers 186 countries. However, the United States, including Haiti, is the only one that has not yet ratified the treaty. This is due to the lack of federal laws.

Although the United States has introduced bills to prohibit waste from being transported or disposed of abroad, they have not passed the legislative committees. This is a shame as numerous studies and analyses done by the EPA have shown how hazardous hazardous waste can be to the environment and the people living there. There is no current plan to address the Basel Convention Treaty ratification.

eCycle Florida is an R2 Certified electronics recycling company in the state of Florida. Our processes and procedures are dedicated to the proper destruction and recycling of your electronics. Check out the services in the multitude of industries that we offer:

Contact eCycle Today to get more information on the question is e waste hazardous and check out our 5-star reviews!